Posted on December 9, 2019 by ClarinetMike 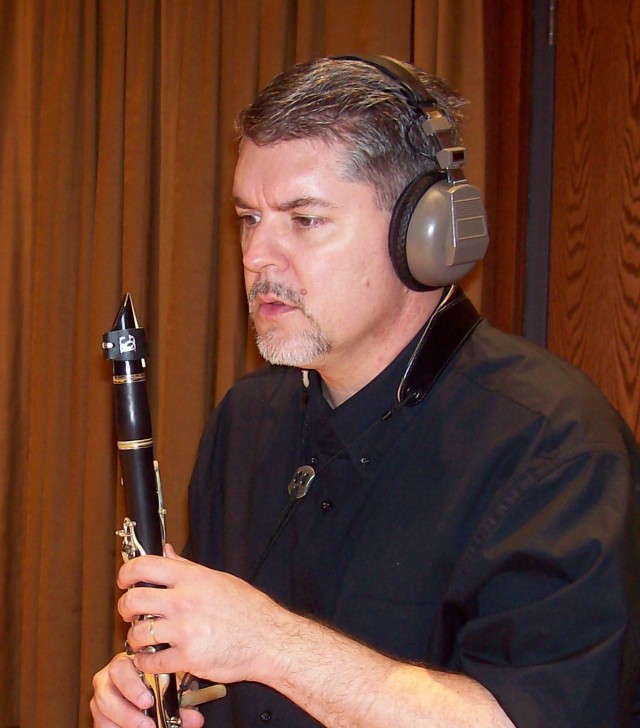 ClarinetMike in the studio recording a new CD.

I recently posted 10 Time Management Tips on my ClarinetMike Blog. The third tip is:

A few years ago, I posted these tips in a ClarinetMike Blog post on various social media outlets and an astute person on LinkedIn asked how this could be done, i.e. “nicely get rid of people.” Below is my response to him.

Years ago, I heard a recording of a time management/motivation speaker and former minister named Coy Quisenberry.  He explained how he quickly and courteously “moved along” overly-chatty visitors to his office when he was a minister at a church.  The following is similar to what he said.

After a few minutes of letting the visitor speak, I would get up from my chair and walk out of my office at the same time continuing the conversation. The visitor would always follow me through the doorway into the hall outside. I would then walk the visitor down the hall toward the elevator (to put him/her on it!). I would gently say, “It’s great to see you and have a chance to catch up on things, but I really need to get back to my office. Please give me a call some time. Thanks!” And then I would head back to my office. Most of the time this worked and the visitor was gone.

If the guest was a woman, I sometimes would head toward the Men’s restroom. This also worked well. On a few occasions, when a guest just wouldn’t stop talking, I would tell them with more firmness, but nicely, that I had work to do and just couldn’t keep speaking to them. They would invariably realize they were being a pest and would apologize. And, importantly, leave without offense being taken.

American Clarinetist Michael Dean “ClarinetMike” performs and teaches internationally and across the USA to consistent praise such as, “world-class clarinetist and pedagogue,” “consummate performer,” “inspirational,” “outstanding teacher,” “super,” “brilliant performer,” and “one of the best clinicians I have ever seen.” Dr. Dean’s career is headlined by appearances at Carnegie Hall, ClarinetFest, NACWPI, Royal Northern College of Music, and Eastman School of Music, with recent recitals and master classes in Italy, Spain, Canada, Michigan, Ohio, Kansas, Iowa, Louisiana, and Texas. He recently returned for a fourth summer to the beautiful Italian Alps of Vipiteno, Italy as Clarinet Artist Faculty in Residence at the international Orfeo Music Festival. He is featured on 6 commercial CD’s including his soon-to-be-released new CD, Postcards from Silver Lake. He is also prominent on New Media, such as YouTube. He was clarinetist with the Paducah Symphony Orchestra for 11 years and he’s also performed with the Southwest Symphony, Nevada Symphony, Abilene Philharmonic, Southeast Chamber Players, Red Mesa Trio, and Duo 35. He has given more than 500 master classes, clinics and performances at universities, conservatories, conferences, festivals, high schools, junior high schools, and a diverse array of venues. As “ClarinetMike,” he writes for his noted and widely-read ClarinetMike Blog – viewed in 150 countries on 6 continents, clarinetmike.wordpress.com. His blog is the #1 clarinet blog on the Internet according to Google Search and a recent ranking on Feedspot. His articles also appear in professional journals such as the Southwestern Musician, The Bandmasters’ Review, WINDPLAYER, and NACWPI Journal. He is a past president and former officer on the National Board of the National Association of College Wind and Percussion Instructors (NACWPI). After a successful 20 years of teaching clarinet at the university level, he relocated to his native Texas due to family concerns. He is currently an active clarinet and woodwind performer, teacher, clinician, blogger, and consultant based in Dallas-Fort Worth, Texas. Dr. Michael Dean studied clarinet performance at Texas Tech University, University of Texas at Austin, University of Colorado at Boulder, and University of Texas at Arlington. His teachers include Robert Walzel, Phil Aaholm, Carol Jessup, Bob Ackerman, and Jess Youngblood. He is a BG France Performing Artist and his professional website is clarinetmike.com. Mike and his family live in Hurst, Texas. His family’s new Golden Retriever, Nimbus, is a relative of Andy.
View all posts by ClarinetMike →
This entry was posted in All, All-State, ClarinetMike's Clarinet Teacher Tips, Performance & Pedagogy and tagged Clarinet, clarinet blog, Clarinet Practice, Clarinet tips, clarinetmike, ClarinetMike Blog, ClarinetMike says, Michael Dean clarinet, time, time management, time management tips, time tips. Bookmark the permalink.