Posted on January 2, 2019 by ClarinetMike

Andy, our beloved family dog, was a creature of habit, just like people!

As of today, a few [some…many…most…all!] of you who made New Year’s Resolutions have broken at least one [some…many…most…all!]. Don’t give up! Below is some help for you – and ME! Let us think about and work on our HABITS, such as the important habit of great practice!

BASEBALL! (Pitchers and Catchers Report in 41 Days!) When I was a kid, I played little league baseball. While fielding a position, my coaches taught me to keep my right thumb between my first two fingers when the pitcher started to make his pitch. This way, if a ball was hit to me, my fingers would go to the ball in my glove with perfect hand position for throwing a baseball (see pictures below). 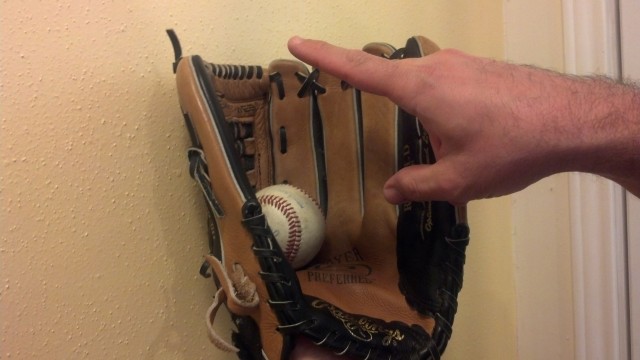 The above is a small, but significant, illustration of the power of habit to shape our lives.  In view of this, I believe it is vital that we constantly work to ingrain great habits (physical and mental) in our own clarinet playing and that of our students. This is true not only for the rhythms, notes and dynamics of a specific work one is working on, but with fundamentals such as embouchure, tonguing, voicing, relaxation, posture, confidence, etc.

PS. Here’s an example of how this often works out in the clarinet (and saxophone, etc.) world. In coming weeks, many high school seniors here in the USA will be taking auditions for entrance and scholarships at colleges, universities and conservatories. Some of them will play “high, loud, and fast” with blinding technical speed but will be passed over (i.e. not accepted or given scholarships) because they have poor fundamentals such as bad tone, articulation, rhythm, etc. (This is true for some All-Staters, too! I know some horror stories….)

American Clarinetist Michael Dean “ClarinetMike” performs and teaches internationally and across the USA to consistent praise such as, “world-class clarinetist and pedagogue,” “consummate performer,” “inspirational,” “outstanding teacher,” “super,” “brilliant performer,” and “one of the best clinicians I have ever seen.” Dr. Dean’s career is headlined by appearances at Carnegie Hall, ClarinetFest, NACWPI, Royal Northern College of Music, and Eastman School of Music, with recent recitals and master classes in Italy, Spain, Canada, Michigan, Ohio, Kansas, Iowa, Louisiana, and Texas. He recently returned for a fourth summer to the beautiful Italian Alps of Vipiteno, Italy as Clarinet Artist Faculty in Residence at the international Orfeo Music Festival. He is featured on 6 commercial CD’s including his soon-to-be-released new CD, Postcards from Silver Lake. He is also prominent on New Media, such as YouTube. He was clarinetist with the Paducah Symphony Orchestra for 11 years and he’s also performed with the Southwest Symphony, Nevada Symphony, Abilene Philharmonic, Southeast Chamber Players, Red Mesa Trio, and Duo 35. He has given more than 500 master classes, clinics and performances at universities, conservatories, conferences, festivals, high schools, junior high schools, and a diverse array of venues. As “ClarinetMike,” he writes for his noted and widely-read ClarinetMike Blog – viewed in 150 countries on 6 continents, clarinetmike.wordpress.com. His blog is the #1 clarinet blog on the Internet according to Google Search and a recent ranking on Feedspot. His articles also appear in professional journals such as the Southwestern Musician, The Bandmasters’ Review, WINDPLAYER, and NACWPI Journal. He is a past president and former officer on the National Board of the National Association of College Wind and Percussion Instructors (NACWPI). After a successful 20 years of teaching clarinet at the university level, he relocated to his native Texas due to family concerns. He is currently an active clarinet and woodwind performer, teacher, clinician, blogger, and consultant based in Dallas-Fort Worth, Texas. Dr. Michael Dean studied clarinet performance at Texas Tech University, University of Texas at Austin, University of Colorado at Boulder, and University of Texas at Arlington. His teachers include Robert Walzel, Phil Aaholm, Carol Jessup, Bob Ackerman, and Jess Youngblood. He is a BG France Performing Artist and his professional website is clarinetmike.com. Mike and his family live in Hurst, Texas. His family’s new Golden Retriever, Nimbus, is a relative of Andy.
View all posts by ClarinetMike →
This entry was posted in All, Performance & Pedagogy and tagged band clarinet, baseball, Clarinet, clarinet blog, Clarinet Clinic, Clarinet Lessons, clarinet master class, Clarinet Teaching, clarinetmike, ClarinetMike Blog, ClarinetMike says, Dog, Golden Retriever, Habits, michael dean, Michael Dean clarinet, Practice Tips, private lesson pedagogy, Skype, Skype Clarinet Lessons, teaching, teaching tips. Bookmark the permalink.