Roy Rogers and Other Famous People Who Played the Clarinet 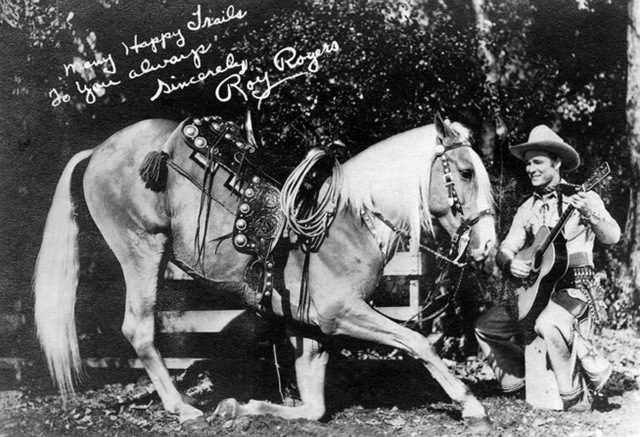 Roy Rogers: King of the Cowboys and Clarinetist!

ClarinetMike says, “Below is a reposted list of famous people who played the clarinet – if you know of someone who should be added to the list, let me know!”

Found this on young Roy Rogers (real name Leonard): Leonard had a trained rooster that he carried around on his shoulder.  And in high school he taught a groundhog to sit patiently while he practiced playing the clarinet.“One day the boy smuggled the groundhog to school,” his mother says. “And when it came time for assembly, Leonard put the animal in his desk. Soon, however, the pet heard Leonard’s clarinet tooting in the auditorium. She crawled out and followed the sound until she found her master. When the groundhog interrupted the program by climbing into Leonard’s lap, he expected a scolding. But the band leader was so impressed that instead he tried to buy the animal. The few dollars would have meant a lot to us then, but Leonard wouldn’t sell.”  (From HERE)

I found Roy Rogers and most of the other famous people who played the clarinet listed below on the Clarinet BBoard. (From HERE)

Modern composers/conductors who also played (even briefly in their youth) clarinet:

NOTE: The publicity photo of Roy Rogers and Trigger above is in Public Domain and available HERE. See HERE for links to arcane legal information, etc. about the photo.

American clarinetist MICHAEL DEAN performs and teaches internationally and across the USA to consistent praise such as "world-class clarinetist and pedagogue," "consummate performer," "inspirational," "outstanding teacher," "super," "brilliant performer," and "one of the best clinicians I have ever seen." His career is headlined by appearances at Carnegie Hall, ClarinetFest, NACWPI, Eastman School of Music, and Royal Northern College of Music with recent recitals and master classes in Canada, Italy, Spain, Kansas, Iowa, Missouri, Louisiana, and Texas. In July, he will again return to Vipiteno, Italy as Clarinet Artist Faculty in Residence at the international Orfeo Music Festival 2019. He is featured on 5 commercial CD's and on New Media, such as YouTube. He is currently preparing another new clarinet CD, Postcards from Silver Lake. Dr. Dean has given more than 500 clinics, master classes and performances at high schools, universities, conferences and other venues. For 11 years he was a clarinetist with the Paducah Symphony and he's also performed with the Southwest Symphony, Nevada Symphony, Abilene Philharmonic, Southeast Chamber Players, Red Mesa Trio, and Duo 35. His articles appear in journals such as Southwestern Musician, WINDPLAYER, NACWPI Journal and The Bandmasters' Review. As "ClarinetMike," he writes for his widely-viewed ClarinetMike Blog, the Internet’s #1 clarinet blog read in 150 countries on 6 continents: clarinetmike.wordpress.com. After a successful 25 years of teaching clarinet at the university level, he relocated to his native Texas due to family concerns. He is a past president and former National Board officer of the National Association of College Wind and Percussion Instructors (NACWPI). Dr. Michael Dean studied clarinet performance at Texas Tech University, University of Colorado at Boulder, University of Texas at Austin and University of Texas at Arlington. His teachers include Robert Walzel, Phil Aaholm, Carol Jessup, Jess Youngblood, and Bob Ackerman. His web page, clarinetmike.com, features video of his teaching and performing as well as information on his CD's and other publications. He is a BG France Performing Artist.
View all posts by ClarinetMike →
This entry was posted in All, Performance & Pedagogy and tagged Clarinet, clarinet blog, Clarinet Lessons, clarinetmike, ClarinetMike Blog, michael dean, Michael Dean clarinet, Roy Rogers, Trigger. Bookmark the permalink.