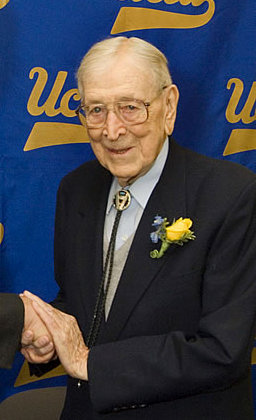 As many of you know, I’m a huge fan of the late great John Wooden.  One of the many, many things I learned from him by reading his books, etc. is his “Four Laws of Learning.”

Building just a little on this, I propose a “Five Steps to Teaching.” To Wooden’s “Four Laws” I would add “Correction” between Imitation and Repetition.  (I’ve heard him include Correction to the four laws, so this is not original to me; I’m just changing the packaging a little.)

So,  for example, here’s how the “Five Steps” would work in teaching a student how to articulate on a clarinet:

Sometimes it makes sense to switch the order of the steps based on the topic, student, etc. For example, it might be useful to demonstrate and then explain. Or, after the imitation, the student might need another dose of explanation and demonstration along with correction. This might especially be true with tonguing. (FYI, I have found that it takes a lot of work to improve one’s tonguing on the clarinet. However, articulation is profoundly important – notice the prominence of Beethoven 6th Symphony mvt. 1 and Mendelssohn’s Midsummer Scherzo on orchestral audition lists.)

ClarinetMike says, “Try using the ‘Five Steps’ in YOUR teaching.”

For more wisdom from John Wooden, click HERE (scroll down).

NOTE: The above is a very slightly revised version of a previous post.

American Clarinetist Michael Dean “ClarinetMike” performs and teaches internationally and across the USA to consistent praise and acclaim such as, “world-class clarinetist and pedagogue,” “consummate performer,” “inspirational,” “outstanding teacher,” “super,” “brilliant performer,” and “one of the best clinicians I have ever seen.” Dr. Michael Dean’s career is headlined by appearances at Carnegie Hall, ClarinetFest, NACWPI, Royal Northern College of Music, and Eastman School of Music, with recent recitals and master classes in Italy, Canada, Spain, Michigan, Ohio, Kansas, Iowa, Louisiana, and Texas. He is currently planning an international recital and master class tour of Israel for spring 2022. He is on the faculty of the international Orfeo Music Festival in Vipiteno, Italy as Clarinet Artist Faculty in Residence. Michael Dean performs as principal clarinetist with the Dallas Chamber Wind Ensemble and Duo 35 with saxophonist Todd Oxford. He performed with the Paducah Symphony Orchestra for 11 years and has also performed with the Southwest Symphony, Nevada Symphony, Abilene Philharmonic, Abilene Opera, Southeast Chamber Players, and Red Mesa Trio. As a clarinet performing and recording artist, he has commissioned, premiered, edited, toured with, and recorded new and lesser-known clarinet works. He is featured on 6 commercial CDs, including the soon-to-be-released Postcards from Silver Lake CD. He is also prominent on New Media, such as YouTube and Facebook. He has given more than 600 master classes, clinics and performances at universities, colleges, conservatories, festivals, conferences, and high schools. His ClarinetMike Blog and ClarinetMike QuickTips are widely read on the internet and social media and viewed in more than 150 countries on 6 continents. His articles also appear in professional journals such as Southwestern Musician, WINDPLAYER, The Bandmasters’ Review, and NACWPI Journal. He is a past president and former National Board Officer of the National Association of College Wind and Percussion Instructors (NACWPI). A committed teacher and noted pedagogue, Dr. Dean’s students enjoy successful careers as professional performers, educators, and administrators and are consistently accepted into prestigious university music schools. They consistently win awards and distinctions at competitions and festivals including solo & ensemble, all-region, all-state, and various concerto and other competitions. After a successful 20 years of teaching the clarinet and music at the university level, he relocated to his native Texas due to family concerns. He is currently an active clarinet and woodwind performer, teacher, clinician, and consultant based in Dallas-Fort Worth, Texas. Dr. Michael Dean studied clarinet performance at Texas Tech University, University of Texas at Austin, University of Colorado at Boulder, and University of Texas at Arlington. His teachers include Robert Walzel, Philip Aaholm, Carol Jessup, and Jesse Youngblood. He is a BG France Performing Artist and his professional website is clarinetmike.com. Mike and his family live in Hurst, Texas. His family’s new Golden Retriever, Nimbus, is a relative of Andy.
View all posts by ClarinetMike →
This entry was posted in All, ClarinetMike's Clarinet Teacher Tips, Performance & Pedagogy and tagged Clarinet, clarinet blog, clarinetmike, ClarinetMike Blog, ClarinetMike says, ClarinetMike's Clarinet Teacher Tips, John Wooden, teaching, teaching tips. Bookmark the permalink.