Posted on December 1, 2014 by ClarinetMike 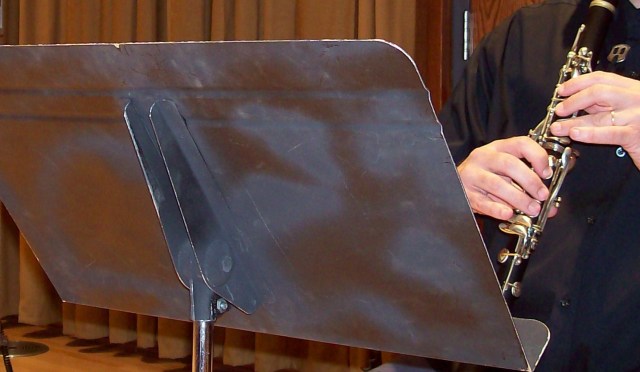 [NOTE: This idea is adapted from an excellent clinic that I heard noted saxophonist James Houlik give at a TMEA Clinic/Convention years ago.]

All-Region Auditions in a week? Music Jury coming up? BIG Guest Recital in a couple of months and want to make sure you are ready? Well, ClarinetMike is here to help! Below is a simple practice technique that I call “The Fast Way!” (FYI, this works great in Rhy-No Practice.)

1. Pick out a measure that needs work.

2. Play the first two notes in the measure slowly in half notes without rhythms. Go back and forth slowly in half notes between these first two notes – play 3-5 times. Make sure the finger movement is absolutely “clean,” i.e. relaxed, efficient, accurate, and quick. As in all practice, be sure to do this with GREAT fundamentals such as confidence, relaxation, air, body position, tone, etc.

3. Repeat Step 2 with the second and third notes in the measure. Then play notes one, two, and three in a row slowly – this is sometimes called “Add A Note.” Again, do not play any rhythms, just half notes working on “clean” finger combinations.

3A. “The Faster Way!” Alternate Method: Repeat Step 2 with the second and third notes in the measure. But, instead of  the “Add A Note” approach, just continue with the third and fourth notes, then fourth and fifth, fifth and sixth, etc. all in half notes.

4. Keep adding notes as in Step 3 (or 3A) until the measure is complete. Then go back and play the measure normally and see what happens! (As mentioned above, this becomes even more powerful if used in Rhy-No Practice.)

The goal of this technique is to learn (or LOAD) only accurate information. When a clarinetist practices too fast, carelessly, etc., some inaccurate information is almost certainly engrained and this very much slows the learning process. (See the article by Frank R. Wilson on this.)

ClarinetMike says, “Want to learn music in a hurry? Then STOP and practice ‘The Fast Way!'”

American Clarinetist Michael Dean “ClarinetMike” performs and teaches internationally and across the USA to consistent praise and acclaim such as, “world-class clarinetist and pedagogue,” “consummate performer,” “inspirational,” “outstanding teacher,” “super,” “brilliant performer,” and “one of the best clinicians I have ever seen.” Dr. Michael Dean’s career is headlined by appearances at Carnegie Hall, ClarinetFest, NACWPI, Royal Northern College of Music, and Eastman School of Music, with recent recitals and master classes in Italy, Canada, Spain, Michigan, Ohio, Kansas, Iowa, Louisiana, and Texas. He is currently planning an international recital and master class tour of Israel for spring 2022. He is on the faculty of the international Orfeo Music Festival in Vipiteno, Italy as Clarinet Artist Faculty in Residence. Michael Dean performs as principal clarinetist with the Dallas Chamber Wind Ensemble and Duo 35 with saxophonist Todd Oxford. He performed with the Paducah Symphony Orchestra for 11 years and has also performed with the Southwest Symphony, Nevada Symphony, Abilene Philharmonic, Abilene Opera, Southeast Chamber Players, and Red Mesa Trio. As a clarinet performing and recording artist, he has commissioned, premiered, edited, toured with, and recorded new and lesser-known clarinet works. He is featured on 6 commercial CDs, including the soon-to-be-released Postcards from Silver Lake CD. He is also prominent on New Media, such as YouTube and Facebook. He has given more than 500 master classes, clinics and performances at universities, colleges, conservatories, festivals, conferences, and high schools. His ClarinetMike Blog and ClarinetMike QuickTips are widely read on the internet and social media and viewed in more than 150 countries on 6 continents. His articles also appear in professional journals such as Southwestern Musician, WINDPLAYER, The Bandmasters’ Review, and NACWPI Journal. He is a past president and former National Board Officer of the National Association of College Wind and Percussion Instructors (NACWPI). A committed teacher and noted pedagogue, Dr. Dean’s students enjoy successful careers as professional performers, educators, and administrators and are consistently accepted into prestigious university music schools. They consistently win awards and distinctions at competitions and festivals including solo & ensemble, all-region, all-state, and various concerto and other competitions. After a successful 20 years of teaching the clarinet and music at the university level, he relocated to his native Texas due to family concerns. He is currently an active clarinet and woodwind performer, teacher, clinician, and consultant based in Dallas-Fort Worth, Texas. Dr. Michael Dean studied clarinet performance at Texas Tech University, University of Texas at Austin, University of Colorado at Boulder, and University of Texas at Arlington. His teachers include Robert Walzel, Philip Aaholm, Carol Jessup, and Jesse Youngblood. He is a BG France Performing Artist and his professional website is clarinetmike.com. Mike and his family live in Hurst, Texas. His family’s new Golden Retriever, Nimbus, is a relative of Andy.
View all posts by ClarinetMike →
This entry was posted in All, All-State, ClarinetMike's 101 Clarinet Tips, Performance & Pedagogy and tagged All-State, Clarinet Practice, clarinetmike, Michael Dean clarinet, music jury, Practice Tips, Texas All-State. Bookmark the permalink.